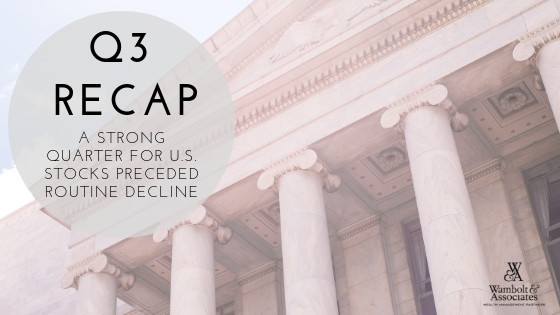 Looking back, Q3 was a strong quarter for U.S. stocks. The strong fundamentals of our economy were seen in all three indices during the third quarter, and the equity markets performed well despite concerns over escalating international trade tensions.

Analysts saw the benefits of the recent tax cuts and deregulation translate into expanding earnings for U.S. companies. A strong labor market led to rising consumer confidence and higher spending.

Consumer sentiment reached its second highest level since 2004, as tracked by the University of Michigan’s Consumer Sentiment Index. Sentiment among consumers improved across all income categories with the expectation of higher wages and continued job growth. Modest levels of inflation also propelled confidence among consumers.

Economists are also citing tax cuts as a monumental factor in economic expansion. The White House Council of Economic Advisers reported that 623 companies this past month announced bonuses, pay increases, and better benefits resulting from recent tax cuts. The council also estimates that over 6 million American workers have so far directly benefited from the tax law changes.

Newly imposed tariffs by the Department of Commerce on Chinese imports became effective in late September. The $200 billion worth of tariffs will begin at a 10% rate and increase to 25% by year-end should the two countries not come to an agreement.

The Department of Commerce is incentivizing U.S. companies to shift production of goods in China to the U.S. by allowing companies to redirect production prior to year-end before tariffs are scheduled to reach 25% on Chinese-made products.

Signs of inflation spurred the Fed to raise rates for the third time this year, with further hikes suggested over the next few months. Rates moved higher across the fixed income spectrum, with the 10-year Treasury bond piercing the 3% mark, a level last reached in May of this year. The Fed also revised its estimates for GDP growth from 2.8% to 3.1% for 2018, with an eventual slowing to 1.8% by 2021.

Oil prices headed higher in September topping levels not reached since 2014. Global energy markets reacted to limited production from OPEC, Saudi Arabia, Russia and the United States. The price for a barrel of Brent oil, which is priced internationally, reached $80 while the price of domestic oil priced as WTI surpassed $72. Adding to the supply strain were recently imposed sanctions on Iranian oil exports along with production constraints in the U.S.

Preliminary damage estimates following the destruction caused by hurricane Florence are expected to reach between $38 billion and $50 billion. The cost of Florence is not expected to be anywhere near the cost of hurricanes Harvey, Maria, or Irma, yet will impose additional strain on an already straddled insurance industry.

Damage estimates are compiled by Moody’s which tracks the claims paying ability of insurance companies, especially during periods of significant payment of claims. The Federal Emergency Management Agency has received over 8,000 claims for flood damage, which allows for a $5,000 payment without an adjuster visit.

Q3 market performance indicated full steam ahead, until the relatively routine event of repricing occurred, primarily seen in the technology sector. Long-term investors that are selective can still find plenty of companies to invest in that are fairly valued and have good growth potential.

The principles of maintaining a well-balanced portfolio still stand; select and periodically rebalance your portfolio for the long-run (see What it means to own a moderately balance portfolio). If you would like to review your portfolio, set up a consultation with your Wambolt advisor.

Photo by Katie Moum on Unsplash