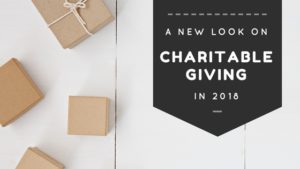 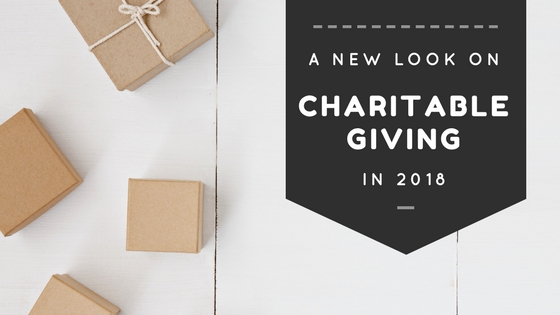 The Tax Cuts and Jobs Act (TCJA) changes some rules around itemized deductions that can impact your tax planning for charitable giving. In short, it may require new planning strategies to get the most out of the tax reform. The bad news is, the combined impact of these changes is expected to reduce the marginal tax benefit of giving to charity by more than one-quarter in 2018, raising the after-tax cost of donating by about 7 percent (Forbes).

The impact of change will be felt most by middle-class donors who make millions of small donations; big dollar donors are less likely to be affected by the new law.

The good news is that a number of alternative giving strategies are still available. Let’s take a closer look.

That’s because TCJA nearly doubles the allowable standard deduction to $12,000 for singles, $24,000 for couples, and $18,000 for heads of household, thereby eliminating a key financial incentive for many to give. Coupled with TCJA provisions that cap state and local tax deductions at $10,000 and other changes, some estimates project that as few as 10% of taxpayers are expected to itemize in the 2018 tax year.

In yet another unintended consequence blow to charities nationwide, TCJA nearly doubles the estate tax exemption, reducing the number of people subject to federal gift and estate taxes as well as the value of long-term charitable strategies motivated by estate tax savings.

In other words, families that used to be aggressively giving to charities to reduce their eventual taxable estate no longer need to do so because the new exemption is so large.  This change alone is expected to shrink the number of households claiming an itemized deduction for their gifts to non-profits by more than one-half, from about 37 million to about 16 million in 2018, according to new Tax Policy Center estimates, as individuals and couples change bequests from charities to their families at significant tax savings.

First, if you typically give $10,000 to $15,000 to charities each year, but now the new $22,000 standard deduction makes it seem like your gifts are not helping you tax-wise, consider “lumping” your gifts for two or more years into one. For example, give all of your 2018 and 2019 giving all in 2018. You will itemize for 2018 and then have zero charitable gifts in 2019, in which year you will take the standard deduction. For example, a donor could give $50,000 in one year rather than $10,000 each year for five years. Giving more in a single year makes it easier to meet the threshold for itemizing charitable deductions, providing a tax benefit for your contribution.

Furthermore, if you don’t expect to itemize deductions in 2018, but still like to make $10,000 to $15,000 in charitable gifts then take heart, there are other planned giving strategies that may fit.

Contact us early in 2018 to talk through your planned giving to get the most financial incentives out of changes in TCJA.

Photo by Leone Venter on Unsplash