Dave Repsher, a Flight for Life nurse, was in an Airbus helicopter on a PR flight when it went down in Summit County in 2015. Dave suffered burns to 90% of his body and was given a negative chance of survival based on the severity of his burns.

Before Dave awoke after the accident, his “family” from Dawg Nation was at his wife’s side with a check for $85,000 to cover medical bills. The Nation delivered a check again the next year. “[Dave] will tell you to this day that is the reason he’s alive today,” says Martin Richardson, co-founder and executive director at Dawg Nation Hockey Foundation. Dave has made a remarkable recovery and is now walking, hiking, skiing, and has even returned to the ice.

Birth of a Nation

The ice is where Dawg Nation’s story begins. In 2003, a team of men got together to play adult recreation hockey each week and share stories. Word of the close-knit “family” grew, and others wanted in. The team split into two squads, and then kept splitting over the years. Today the Dawgs are up to six teams, over 80 players from teens and up, and is one of the largest adult hockey organizations in the region.

In 2010, an original member of Dawg Nation, Jack Kelly, tragically passed away at the age of 53. The remaining Dawgs passed the hat, raising funds for his family, as they’d been doing for other members in need.

From there, the team banded together to formalize their giving efforts in a 501(c)(3) foundation named Dawg Nation. What started as an idea to honor a fallen friend and “make a difference” has blossomed into an important resource for families in need, Martin says. Dawg Nation Hockey Foundation exists to help hockey players and their families in times of crisis due to catastrophic injury or illness. 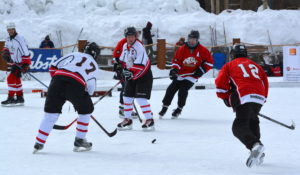 Since 2011, Dawg Nation has given away $1.5 million through the non-profit foundation. Funds are raised year-round in four major events and ongoing one-off events, put on by about 100 active volunteers.

This year’s cyclone storm in Colorado caused the cancelation of one of the foundation’s biggest events, Stand Up for Dawg Nation. The annual comedy event for 500 has been rescheduled for April 17, and it promises to be even bigger. NHL and Denver Broncos team members will attend the sold-out show, where Martin expects to raise at least $50,000 for Dawg Nation.

The Dawg Bowl is the biggest event of the year and is happening June 20-23. Martin says “tons of NHL players” participate and thousands of spectators for the four-day tournament, which is expected to raise over $100,000. Last year, the Colorado Avalanche donated $5 from each registration from the AVS 5K Run, Walk or Skate to the fundraising efforts of Dawg Nation.

Martin says funds go to recipients like the family of Oliver “Butch” Mousseau. A native of Boulder, Colorado, Butch was the first native American NCAA hockey referee and a member of the Lakota Sioux tribe. As he was warming up to referee a collegiate hockey game in Grand Rapids, Mich., he tripped and hit his head on the ice. Sadly, one week later at the age of 48, Butch passed away. Hs family, a wife and three children, did not have life insurance. “We were able to raise $175,000 for the family,” Richardson says.

In addition to ongoing fundraising efforts, Martin and the Dawgs have a bigger dream in play. “Our ultimate goal is to build the world’s first-ever multi-sheet ice rink for disabled and able-bodied athletes,” he says.

The facility will be the home rink of the U.S. Paralympic program, Dawg Nation and its recreational hockey programs, Colorado Sled Hockey, and local teams. Land and key corporate supporters have been secured and fundraising efforts are well underway. You too can help this structure come alive.

Wambolt Senior Wealth Advisor Kelly Fraser is Martin’s sister-in-law. She’s been volunteering with Dawg Nation at events, selling merchandise and doing what is needed for years. She says with this rink, Dawg Nation wants to fill a niche in the broader national community. It’s all part of their motto, Fraser says. “Play hard, play fair, give back“.