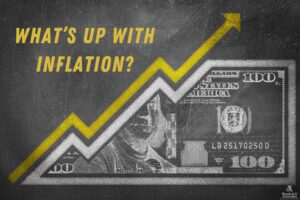 The U.S. population may have become complacent about the effects of high inflation rates. Should you be concerned?

Consumer prices rose 5% in the 12-month period that ended in May, marking the biggest jump in inflation since 2008. Is that a problem? To answer that question, let’s review a few basics about inflation and how inflation has affected the economy in the past.

Inflation is the increase in the price level of goods and services in an economy over time. The greater the inflation, the more the decline in value of a currency. If the price of a car increases from $20,000 to $25,000 in one year, the annual inflation rate for that car is 25%, and the purchasing power of $1 decreases by 20%. If we apply that rate of inflation to all goods and services, an investor’s earnings or portfolio would have to increase by 25% simply to be able to maintain the investor’s same standard of living. This scenario reflects why inflation matters.

Measuring inflation is complex. There are several different ways to measure inflation, and economists debate which is the best in various circumstances. The most common measure is the Consumer Price Index (CPI), which is based on the change in the cost to the average consumer of acquiring a basket of goods or services.[1] The annual inflation rate as measured by CPI over the past 50 years has vacillated considerably from a low of negative 0.4% in 2009, during the Great Recession, to a high of 13.5% in 1980. (Negative inflation, or a decline in prices, is called deflation.)

The higher inflation rates in the 1970s, culminating with the 13.5% inflation rate in 1980, coincided with a period of financial hardship in the U.S. In addition to the inflation-driven decrease in purchasing power, American workers faced high unemployment, with the unemployment rate reaching 7.8% in July 1980.[2]

Investors also faced a challenging environment, since their real returns – after taking into account inflation – were negative during the decade of the 1970s. And, lest we forget, the cure was painful. The Federal Reserve Bank raised interest rates and a major recession ensued, with 30 year mortgage rates over 18% in 1981.[3]

Inflation then, as now, is in simple terms caused by too many dollars chasing too few goods and services. Back in the 1970s, the macroeconomic policies that many argue caused inflation included federal budget deficits, wage and price controls, and the end of the gold standard.

So, with an annual inflation rate of 5% in May, and 4.2% in April, are we entering a new period of high inflation?

Some believe the answer is yes, and point to high levels of government spending and deficits. The CARES Act passed in March 2020 authorized $2.2 trillion in federal spending to combat the COVID-19 pandemic. The more recent American Rescue Plan in March 2021 authorized another $1.9 trillion in spending. The total federal debt is currently over $28 trillion, which represents about 127% of the entire U.S. economic output as measured by Gross Domestic Product (GDP), more than double the level of 58% in 2000.[4]

Of course, the recent federal expenditures were intended to combat the effects of the pandemic. However, the resulting deficits are financed in part by the Federal Reserve bank buying U.S. Treasuries and mortgages, amongst other “loose” monetary policies.[6] These policies are the modern equivalent of running the printing presses overtime. In other words, there are a lot of dollars chasing the available goods and services.

Officials from the Federal Reserve have stated that the current inflation increase is “transitory” or short-lived. They cite several factors, including the continuing higher rates of unemployment and temporary bottlenecks in supply chains due to disruptions from the pandemic. The argument is, in essence, that the potential supply of goods and services for the additional dollars to purchase remains high.

In addition, there is the short-term statistical effect of measuring prices today against those of a year ago, when prices had dropped due to the onset of the pandemic. Bear in mind that the Federal Reserve has stated that some level of inflation is desirable; its goal is an annual inflation rate of around 2% over the longer run.[7]

So, is the recent inflation news just a short-term phenomenon that will subside? Or will government spending and increasing federal deficits continue at levels that will cause high inflation for the long-run, causing economic pain for businesses, workers and investors?

As for most macroeconomic questions, there is no clear answer. A solid response for investors is to continue to maintain a diversified portfolio thoughtfully tailored to their individual financial goals.

Cindy Alvarez – Senior Wealth Management Advisor with Wambolt & Associates. Bob Newkirk is a registered C.P.A, former investment banker, and prior Fellow in Law and Economics at the University of Chicago.