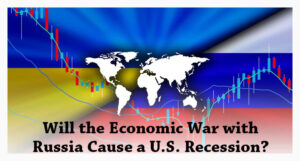 Will the Economic War with Russia Cause a U.S. Recession?

“In the 20th century, the United States endured two world wars and other traumatic and expensive military conflicts, the Depression, a dozen or so recessions and financial panics, oil shocks, a flu epidemic, and the resignation of a disgraced president. Yet the Dow rose from 66 to 11,497.”
– Warren Buffett

Most of the world has been inspired by Ukraine’s willingness and ability to resist military action by
Russia. The suffering of the Ukrainian people is tragic. The reaction has been a broad set of sanctions
against Russia imposed by countries across the globe, with the Russians attempting to respond in
kind. The economic sanctions as a result of the Russian invasion of the Ukraine may create short-term
challenges to the United States economy, but appear unlikely to create a serious recession or to have a
substantial effect on the U.S. economy in the long-run.

The Russian Economy is Small Potatoes
As a result of Russia’s invasion of Ukraine, the U.S., along with the European Union and other countries
have implemented extensive economic sanctions. In response, Russia plans to restrict exports of 200 or
more commodities, including, presumably, to the U.S.. The U.S. has proposed removing Russia’s “most
favored nation” trade status. Trade and other economic relationships between the U.S. and Russia will
contract dramatically this year.

The effects will likely be smaller than you might expect – because the Russian economy is smaller than most realize. Though the landmass of Russia is almost twice that of the U.S., its economy is modest in size. Measured by gross domestic product (GDP) – the total value of finished goods and services produced domestically – the Russian economy is more like that of South Korea, Australia, Brazil or Canada. In fact, the U.S. economy is about 14.5 times the size of Russia’s.

Remarkably, that gap has almost doubled within the last decade. The U.S. economy is growing
much faster than Russia’s.

In addition, trade between the U.S. and Russia is not significant – at least to the U.S. Imports
from Russia in 2021 were about $16.9 billion – which represents less than 1% of the U.S. 2021
GDP. By comparison, the U.S. imports $435 billion of goods and services from China. Even
Canada – with an overall economy about the size of Russia’s – is a far more important trading
partner. U.S. imports were about $276 billion from Canada in 2021.

Put another way, Canadian imports by the U.S. were 16.3 times those from Russia. Chinese
imports were 25.7 times higher.

Overall, the economic impact on the U.S. of cutting off trade with Russia does not appear to be
significant. We can live without Russian caviar and nesting dolls, and the Poles make very good
vodka. More substantively, the commodities and other goods and services that Russia sends to
the U.S., while valuable and in some cases problematic to replace in the short-run, in the longrun are replaceable.

The U.S. Doesn’t Need Russian Oil
The most significant commodities Russia produces are crude oil and natural gas. The Russian
attack on Ukraine has also prompted a world-wide reaction in these specific markets. The U.S. has
moved to ban all imports of Russian oil and gas. The United Kingdom has done the same with oil.
13976 W. Bowles Avenue, Suite 200 • Littleton, CO 80127 • (720) 962-6700 • www.wamboltwealth.com
The European Union, which Vladimir Putin may have thought was beholden to Russian supplies,
has committed to reducing its imports of Russian natural gas by two-thirds by the end of this year.
In the short run, these disruptions to the oil market have caused prices to rise. Brent crude
oil spiked to over $125 per barrel, from the mid-$90s, though it has fallen back toward $100
per barrel recently. As a result, gasoline prices at the pump have also risen, hurting American
pocketbooks. Over time, however, the U.S. is well-positioned to minimize the effect of a ban on
Russian oil imports.

This flexibility is because the U.S. is the world’s largest oil producer. The advent of sophisticated
fracking techniques, though controversial, is the primary reason. The U.S. produces over one
million barrels of oil per day more than both Saudi Arabia and Russia.

As a result, the U.S. has recently been, at times, a net exporter of oil. The U.S. is in no immediate danger of running out of this still-valuable resource.

The U.S. does import oil into certain areas of the country for various reasons. However, most of
this oil comes from Canada, Mexico, and Saudi Arabia – not Russia.

The Ukraine conflict creates additional uncertainty about the performance of the U.S. economy
and financial markets in 2022. Volatility in commodities markets and stock prices, and the
resulting challenges in setting inflation policies, may continue for several months. (See, e.g.,
Who’s Afraid of the Big, Bad Fed?) However, the U.S. economy dwarfs that of Russia, and the
severing of economic relationships will hurt Russia far more.
These events illustrate the need for investors to set aside in cash – or other liquid, low-risk
investments – funds for use in the near term. Your Wambolt advisor can help you review your
portfolio to make sure your cash allocation fits your current spending plans.

Cindy Alvarez is a Senior Wealth Management Advisor and owner in Wambolt & Associates. Bob Newkirk is a
registered C.P.A, former investment banker, and prior Fellow in Law and Economics at the University of Chicago.