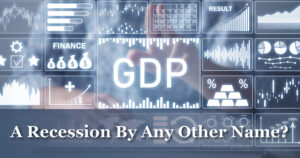 “There is no Ground Hog Day, when all the economists come out from the tunnel and declare the recession is over. They have a retroactive, seasonally-adjusted Ground Hog Day.”
– Peter Lynch

The recent debate about whether the economy is or is not already in a recession can be a distraction from the important underlying facts. What is generally accepted is that the U.S. economy is weakening. Economic growth, as measured by the domestic production of goods and services, is either slowing or reversing. Markets usually perform less well when economic output falls. However, overall market declines may be starting to reverse, and may also provide attractive opportunities to invest in specific companies.

GDP Explained
To describe what constitutes a recession, a few basic economic terms are helpful. The first is Gross Domestic Product (GDP). GDP measures the total value of all final goods and services produced within a country. GDP is an imperfect but commonly accepted measure of the size of a country’s economy. The U.S. is the largest economy in the world. During 2020 in the U.S., the annualized GDP was $20.9 trillion. By comparison, the GDP of China for 2020 was $17.7 trillion – a smaller GDP despite the Chinese having a population advantage of over one billion people.

Total GDP is the sum of several aspects of the economy: consumer spending, investment spending, primarily by business, and government spending. GDP is increased by any trade surplus and decreased by any trade deficit. Another key aspect of measuring GDP is to use “real” figures, or dollars adjusted for the effects of inflation. For example, if a (very small) economy has a GDP of $100, and annual inflation of 10%, if the GDP the following year is $110 the “real” GDP has not changed at all. The increase is only the effect of inflation. (See What’s Up With Inflation?)

Recessions Defined
A rule of thumb for when the economy is in a recession is if there are two consecutive quarters, or six months, of a decline in the real GDP. However, the Federal Reserve Board (Fed) relies on a private think tank, the National Bureau of Economic Research (NBER) to define recessions, based on a broader array of economic data. The NBER has not declared whether the U.S. economy has entered a recession in 2022.

A recession is one aspect of the overall economic cycle. That cycle consists of expansion to a peak, then recession to a trough, then back to expansion. Since 1947, per the NBER, the U.S. economy has experienced 12 recessions, each in connection with a full business cycle of expansion, peak, recession and trough.

As a result of the pandemic, the U.S. economy experienced a brief but sharp recession in 2020. The economy hit a trough in April 2020 then recovered strongly into an expansionary phase. The current concern is that the U.S. economy may have already entered a recession. This is because annualized, real GDP decreased in each of the first two quarters of 2022, by 1.6% and 0.9%.

GDP & Investment Returns
Unsurprisingly, there is a strong relationship between overall economic production, measured by GDP, and overall performance of the stock market. When the economy is growing, businesses are selling more goods and services, and in general the valuation of their stocks increases. When sales fall, stock prices fall.