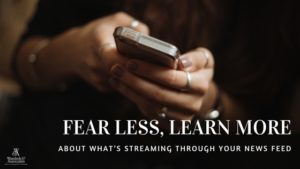 The year 2018 started strong with a tax reform boost on January 1. Since then, the market and economic news has become decidedly more worrisome. To many, it looks like too many pieces are pushing and pulling the economy in different directions, and the result is fear.

To fear less, we need to learn more. By putting some of the macroeconomic pieces of the puzzle together, and in order, we can see through the heavy-handed news trends that the fundamentals propping up our nation’s economy remain strong.

Reduced corporate tax rates and a significant deduction for all pass-through entities gives businesses of all sizes a path to greater prosperity beginning this year. The benefits to big businesses are starting to roll out. Warren Buffet, in an annual letter to investors, disclosed Berkshire Hathaway’s windfall of $29 billion—part of a $65.3 record profits in 2017—from recent changes to the U.S. tax code. Small- to mid-size businesses also have some great tax planning opportunities to pursue this year to prime the pump for their own revenue windfall on the year.

Some Pieces of the Puzzle

Since January 1, the news has been decidedly more negative on the economy. Like us, you have likely been reading about the varied forces at work from:

What does it all mean?

Consumer spending is expected to increase. According to the Council of Economic Advisers, as of February 12, more than 350 companies have made their intentions public to increase wages, bonuses, retirement account contributions, and investment in workers and equipment. Milwaukee’s Robert W. Baird & Co. reported it will pay cash bonuses of $500 to $1,500 to employees, joining the lengthy list of American companies passing along some of the benefits of federal tax reform to their workers.

That means more money in consumers’ pockets. In addition to increases in take-home pay coming from bonuses and wage and salary increases, nearly 30 million American customers can expect to see reductions in monthly electric and gas bills, as dozens of American utilities have announced intentions to reduce rates since the TCJA was passed (Council of Economic Advisers).

Business spending is expected to increase as well now that companies generally have more cash available to grow and hire employees, and incentives to move production back to this country from overseas. Target Corporation is among the first to announce a significant increase in its minimum hourly pay to $12 starting this spring, with a second increase expected in a matter of months on its way to raising the minimum hourly pay to $15 by the end of 2020.

When people are making more money, they are spending more money. Recall under the Clinton Administration, taxpayers received surplus checks in the mail to entice people to go and spend. Similarly, when money is flowing into businesses and trickles down to workers, it tends to push up the rate of consumer spending and is good for our economy.

Whether or not you believe the burden of national debt is outpacing GDP, the impact of a rising interest rate environment, like the one we are entering, can look new and worrying. The government shuts down when the U.S. Congress can’t agree on how they will pay the interest on our burgeoning deficit. China alone accounts for 19% of the $6.3 trillion in Treasury bills, notes, and bonds held by foreign countries. Fortunately, the rest of the $20 trillion national debt is owned by either the American people or by the U.S. government itself. So we are in essence borrowing money from ourselves, and paying ourselves interest.

But the bigger picture tells us why a rising interest rate environment makes sense today. Monetary experts want to raise interest rates to head off inflation, which happens when more money moves up the food chain. More consumer spending reduces our surplus, which means that business owners can raise their prices and suddenly, we are paying $5 again for a gallon of milk. That’s inflation. If interest rates go up too aggressively, it’s damaging to an economy burdened with debt repayments based on those interest rates. By thoughtfully raising interest rates, people borrow less and spend less, which keeps inflation in check.

By understanding more, we fear less of what we hear and see streaming through our news feeds. There are a number of significant themes and trends to follow this year and piece into your puzzle of knowledge that include:
Take comfort in the knowledge that the fundamentals of the U.S. economy remain sound. Continue to follow the significant themes, build your base and knowledge, and reach out to your investment advisor before you make rash decisions to adjust your wealth portfolio.
0Shares
PrevNext