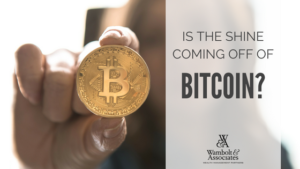 Always prone to wild price swings, speculation turned south on bitcoin in the first quarter of 2018. Where it goes from here is unknown.

On February 2, 2018, CNBC.com reported three bitcoin skids amid a broad cryptocurrency sell-off. The quarter-end brought further disheartening news of bitcoin hitting its worst first quarter in history with over $119 billion wiped from value.

Three real concerns may be demonstrating that the shine is coming off bitcoin and its brethren – performance, security and regulation.

Performance of bitcoin and competitor cryptocurrency Ethereum were worsted only by Ripple, or XRP, in the first quarter 2018, sharply reversing 2017 trends that saw bitcoin climb well over 1,000% in price.

Concerns over security have also taken a bite out of the crypto market. Japan’s largest virtual currency exchange Coincheck announced in January 2018 that hackers stole over $500 million in customer deposits from exchange users in one of the industry’s worst cyberheists. The South Korean cryptocurrency exchange Youbit shut down in December 2017 after being hobbled by a second hack within the year. In a single day, bitcoin saw a 23 percent drop earlier this year after a South Korean official warned of an impending trading shutdown in one of the digital asset’s largest markets. These events highlight the security perils coming to light in trading virtual currencies.

Regulators are moving in on the issue. On March 7, 2018, the Securities and Exchange Commission Divisions of Enforcement and Trading and Markets issued the “Statement on Potentially Unlawful Online Platforms for Trading Digital Assets.” The statement indicates that the mechanism for trading “assets” meets the definition of a “security” under the federal securities laws. This means registration with the SEC. As a tradable financial asset, initial coin offerings fall under the jurisdiction of the SEC and are subject to the regulatory framework governing securities exchanges. In addition, registered exchanges are only allowed to sell securities to brokers and accredited investors. Cryptocurrency supporters fear that a regulatory crackdown will kill revenue streams and halt market growth. Similarly, regulators in Japan, China, South Korea and the EU are examining ways to tighten their grip on cryptocurrency exchanges.

What’s an investor to do?

Early buyers of initial coin offerings saw great returns but with trading now sagging, the speculative nature of cyber currencies is validated. Regulators are taking action, signaling a new sheriff to contend with. What’s more, Facebook, Google and Twitter have banned ads as a preemptive strike against blockchain scams that could put investors at risk.

In all, virtual currencies are growing up and their speculative nature is on full display. With so many conflicting signals, broker dealers, custodians, and institutional investors have largely avoided jumping on the cryptocurrency bandwagon and the role these niche currencies will fill going forward remains uncertain.

Photo by Andre Francois on Unsplash