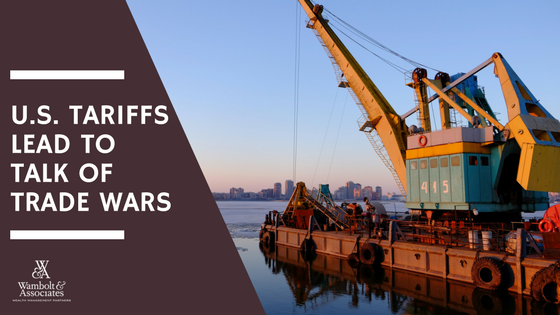 Markets have been rattled this Spring as talk of a looming trade war between China and the United States added to market volatility. In March, the Administration announced $60 billion in tariffs for Chinese imports, with a detailed list of products to be further identified by the Commerce Department. China threatened to retaliate by imposing tariffs on U.S. imports as well as curbing U.S. Treasury purchases.

Intricate supply chains have evolved between the United States and China over the past twenty years. Some U.S. manufacturers ship U.S. made components to China for final assembly, then ship finished products back into the U.S., which poses a challenge as to how trade deficits are calculated.

Over the past twenty five years, China has evolved from a heavy equipment and machinery exporter to a prominent leader in technology product exports. Large international conglomerates have established an enormous manufacturing presence throughout China, relying on cheap labor and quick turnaround times. China’s manufacturing plants are among the most modern in the world, producing large capacities almost entirely for export.

China’s ability to manufacture and export electronic devices has also grown in recent years. As a product exporter, China is able to manufacture and export finished products worldwide. In addition, China exports components that may be used in the manufacturing and assembly of products in other countries, such as the United States. By exporting components and finished products, China is able to hedge against tariff issues and labor costs should they become a factor.

This in turn has led to more U.S. spending on Chinese goods and a sizable trade deficit with China. Over the past 30 years, trade with China has grown from a near trade balance in 1985, to a trade deficit of $375 billion in 2017. Imports from China were $506 billion while U.S. exports to China were $130 billion, creating the imbalance impacting economic conditions that we see today.