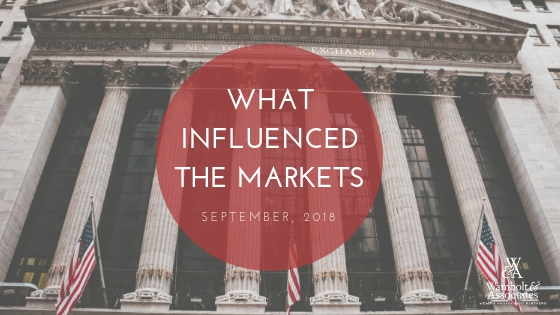 Emerging market currencies were rattled worldwide as turmoil with Argentina and Turkey spilled over into the broader markets. Contagion concerns spread in late August as Turkey’s currency fell following comments by the European Central Bank (ECB). Argentina saw its currency collapse as it sought immediate financial assistance from the International Monetary Fund (IMF).

Contagion refers to the threat that happenings in Turkey and Argentina could impact other emerging market economies. The brewing financial crisis with Turkey is similar to the government debt crisis that occurred with Greece eight years ago. Recently imposed U.S. sanctions on Russia added to the emerging market distress as the Russian ruble weakened versus other major currencies and the U.S. dollar.

The stock market marked its longest period of uninterrupted gains in history, running 3,453 days from the market low on March 9, 2009 during the depths of the financial crisis. Since then, the Dow Jones Industrial Index catapulted from 6,500 to over 25,500 in August, while the S&P 500 sprang from 666 to over 2,800. Many economists and market analysts attribute the tremendous run to Fed induced liquidity in the form of ultra low rates for an extended period of time.

It has been 10 years since the financial crisis of 2008 when financial markets experienced turbulence not seen in decades. An ultra-low interest rate environment lasted nearly a decade after the Federal Reserve began flooding the financial markets with massive amounts of liquidity to stem the crisis at hand. Since then, numerous legislation and regulations were implemented providing safety measures and guidelines.

Viewed as an optimistic indicator for the U.S. economy, inflation rose the most in seven years as consumer prices increased at an annual rate of 2.9%. While inflation is an indicator of economic expansion in the economy, wages are not keeping up with rising prices nationwide.

California is due to become the first state to impose a quota for the inclusion of women on the boards of publicly traded companies headquartered in the state. Other states are expected to follow California’s lead by eventually implementing similar mandates.

Various social media and technology companies are facing criticism and possible regulatory oversight regarding the influence they maintain. Many see that the political and cultural clout held by just a few companies may eventually be of concern.